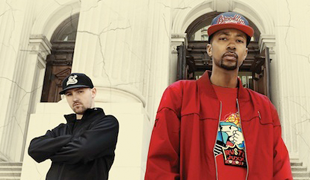 Ruste Juxx alway promotes the “hard body hip hop” brand, and recently teamed up with Boston producer, The Arcitype, for a full-length album entitled V.I.C. (Victorious Impervious Champions). Moving on from his previous work with Marco Polo, Ruste Juxx shines over much of The Arcitype’s glossy production. With a mix of slight G-funk, street anthems, mellow smoker vibes, and some introspective tracks, the sounds of The Arcitype carry the album through a range of topics and emotions. Many of the features are from underground icons like Planet Asia, Craig G, Copywrite, Guilty Simpson, Sadat X, ILL BILL, Termanology, and R.A. The Rugged Man. The balance of tough talk and lyrical skills with a touch of radio-friendly singing helps showcase what each artist brings to the table.

Overall, V.I.C. shows artistic growth for Juxx, who has a history of making strictly hardcore tracks, and shines a light on his ability to talk about family, friends, hard times, and life in general. Juxx embraces the yin and yang of life and doesn’t try to ape the radio hits. Instead, he teams up with his favorites to help re-introduce Duck Down fans to The Arcitype, and his ability to orchestrate an entire album with his own style and approach. If you miss the days of one producer and one emcee (with a few guest spots), then pick up V.I.C. and salute the the next generation of the Gang Starr mentality with Boston and New York flavors.