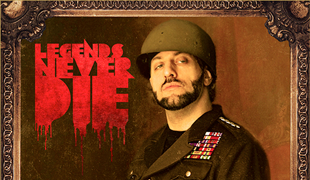 Proverbial rap smack-talker, goofball, and multi-syllable rhyme master, R.A. the Rugged Man’s new album Legends Never Die solidifies his place as one of hip hop’s most talented, prolific, and slept-on emcees. Opening the album with throwback samples and guest features from Talib Kweli, Tech N9ne, and Krizz Kaliko, R.A. showcases his peers and proves that you need the necessary skills to flow on tracks like “Learn Truth” and “Holla-Loo-Yuh”. Balancing the pure lyrical speed anthems, R.A. includes humor on his tracks like “Tom Thum”, “Shoot Me In The Head”, “Laugh, Clown, Laugh” and even links with R&B singer Eamon for a distorted love song titled “Luv To Fuk”. Never one to shy away from his presence as one of the few “whiteboys” in the rap game, R.A. shows that skin color makes little difference when you bring quality rhymes to the table and earn the support of legends like Masta Ace, Brother Ali, and Vinnie Paz on tracks like “The Dangerous Three” and “Sam Pecknpah”.

Legends Never Die is a solid album from front to back, more so than past efforts which always seemed plagued by inconsistent beat selection. The mellow beats for most of the album compliment the content of the lyrics and the carefully picked guest features from Hopsin to Amalie Bruun add a variety to the mix without overpowering the songs. Changing lanes from serious topics of drug abuse and cancer to provocative and offensive humor, race relations, and dedication tracks to the history of the rap world, Legends Never Die paves a wide path for R.A.’s storytelling in the rap game. Purchase Legends Never Die here.