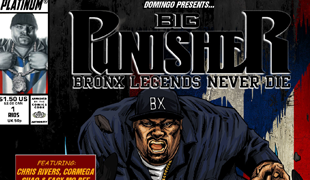 Veteran music producer Domingo has released his latest EP honoring the late great Big Punisher. With the blessing of Pun’s family, Bronx Legends Never Die was released to the world. Domingo stated “His legacy doesn’t get pushed enough. I came across some songs and put it together.” After finding the masters session of Shaquille O’Neal’s song “The Bigger They R” featuring Big Punisher and Fat Joe, Domingo also found a verse from Easy Mo Bee on the track. He included this rare recording on the project and remixed many of Pun’s great verses to original beats. The album consists of 11 tracks with features from Cormega, Chris Rivers, and Kool G Rap. If you’re a Big Pun fan, this is a must-have for your collection. Packages with t-shirts and physical CDs have become available upon order. Purchase Bronx Legends Never Die here or here.