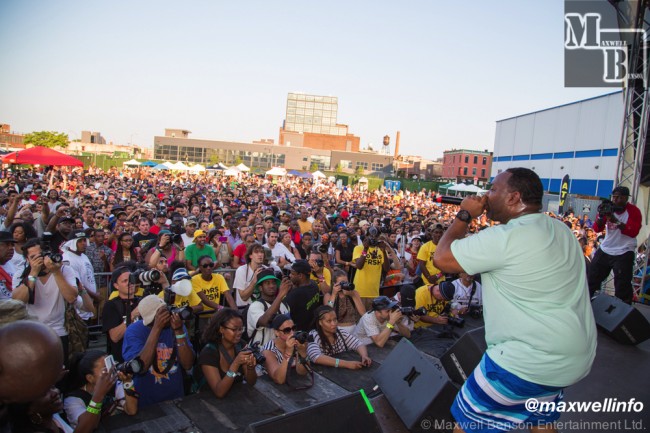 Los Angeles journalist and photographer Maxwell Benson flew to New York to check out the 2014 Brooklyn Hip Hop Festival. He was kind enough to share his experience below.

The stage was made up of CJ Fly, Jay Electronica, CyHi The Prince, and Raekwon, along with hosts DJ Rob Swift, Torae, and Ralph McDaniels. The anticipation of a surprise guest had heightened when Elliott Wilson, Ty Ty, and Afrika Bambaataa showed up backstage, as well as Universal Zulu Nation security. Buckshot, Brand Nubian, and Psycho Les graced the stage, followed by CJ Fly and CyHi The Prince. Jay Electronica entered with over 30 members of Fruits Of Islam, leaving many wondering if his intentions were true, or if he was simply paying homage to Public Enemy. At one point, Mac Miller, Talib Kweli, and J. Cole were on stage together.

The energy peaked when Electronica stopped the show and asked the audience to throw their diamonds in the sky. Moments later, Jay-Z appeared on stage. Both Jays went through a medley of songs like “Young Gifted & Black, “We Made it”, “Shiny Suit Theory” and “P.S.A”. Electronica jumped into the crowd, propped himself on someone’s shoulders and paid homage to the late great producer J. Dilla. He performed “Abracadabra”, while the crowd chanted Dilla’s name.

When Raekwon hit the stage after Jay Electronica, he was joined by Scram Jones to bring out the best underground Brooklyn emcees as guests, including AZ, Lil Fame, Papoose, and Masta Killa. Raekwon performed Wu-Tang’s famous song “Protect Ya Neck” by reciting the verses of all the Wu members. The highlight of Rae’s set was the crowding singing along to “Shimmy Shimmy Ya” in honor of Ol’ Dirty Bastard.

Wes Jackson and his team have created an environment for hip hop culture and music lovers to gather. The Brooklyn Hip Hop Festival is an annual mecca for like-minded hip hop lovers to gather and celebrate.