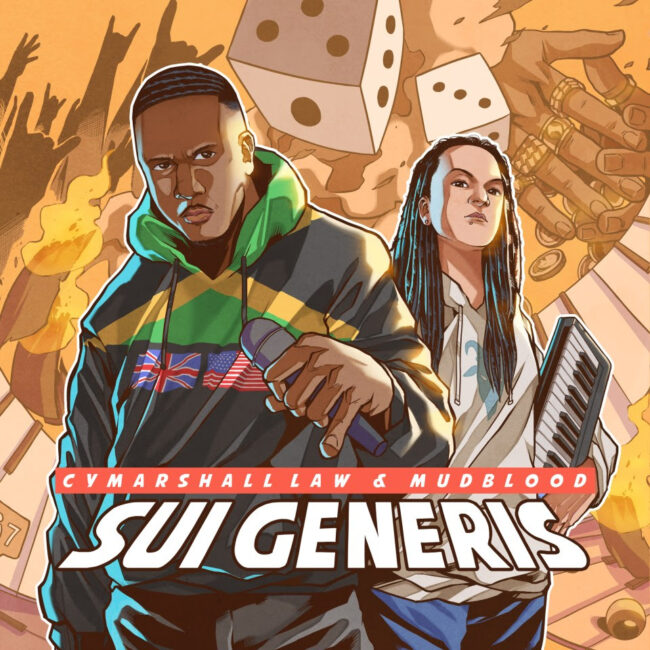 In the early 70s, Hip Hop was born in the Bronx, NY by way of a Jamaican Immigrant,  DJ Kool Herc.  Since the start of the culture, the genre has continually grown outwards from its already international beginnings.  Enter :  Emcee, Cymarshall Law raised in the USA (NJ), but born in the UK by way of Jamaican parents and Producer, Mudblood born in Russia, but of Malagasy descent.  The two Artists come together in a beautiful clash of worlds and styles, to bring forth their 1st collaborative project called Sui Generis, which is a Latin term meaning of it’s own kind, unique.

The name of the album symbolizes not only what Hip Hop was born to be, an original art form, but also a duo that when put together form a diverse style that is 100% percent their own.  This is what you get when you mix two Artists together that are already uniquely designed perfectionists, with a flavor and musical bounce of their own.  Mudblood sets the tone with beautiful emotionally driven canvases in the form of worldly production and Cymarshall Law paints the picture with words using his heart and mind like colors from the painter’s palette.  Creativity reigns supreme here with a wide range of topics that are original in idea and a breath of fresh air, no task seems too great for this duo.

Imagine an album so well crafted moving between Hip Hop musical styles : Boom Bap, Lo-Fi, Hardcore, Story Themed, Descriptive , and songs that have the ability to be mainstream hits, seem effortless for them, awhile keeping its core authenticity and not trying to be anything that it is not.   An Eclectic project, full of raw emotion, heart , toppled with obvious skill and masterful like craftsmanship.  If you want something different , original, yet raw and well polished, look no further , Cymarshall Law & Mudblood are here with Sui Generis. ( Pre-Save the album now on Spotify! )