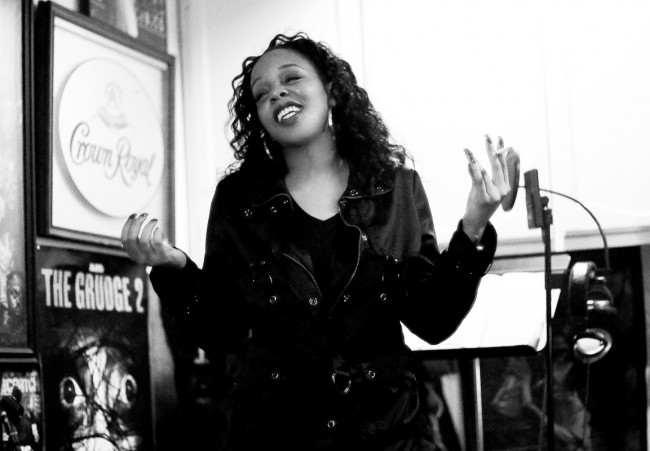 INTERVIEWS
[Shine On is a monthly feature paying homage to those in the Hip Hop community who give back and pay it forward.] 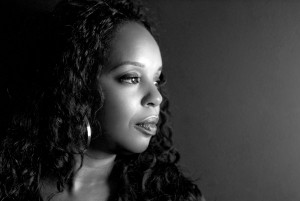 You can tell a lot about an artist by what he or she does when no one is looking. You know, the time they spend out of the industry spotlight, where there is no buzz, the time many worry will make them irrelevant. For Rah Digga, that space has always been where most of her pivotal moves have been made. When major label issues engulfed her early in her career, she quietly made the move to be a successful independent artist. After taking time off to be a mom and focus on family, she returned with her second album Classic, where she collaborated with super-producer Nottz. Rah has navigated industry challenges and double standards flawlessly and like a true champion. Strength is her brand and now she is taking all she has learned and paying it forward.

Rah Digga’s latest venture has taken her out of the studio and into the classroom where she invests in youth empowerment. She has quietly started her own non-profit organization, Lyrics Matter LLC, where she shares her knowledge of Hip Hop culture with teens pursuing a music career. We caught up with the New Jersey native during Women’s History Month to discuss the importance of telling our own stories, Rah’s collaboration with the IArts Media Institute, and why it’s time for her to come out of hiatus.

THE BEE SHINE: Tell me about your organization. What inspired it?

Rah Digga: Well, my LLC is called Lyrics Matter LLC and it’s an initiative that I created because Hip Hop influences so many –not just influences, basically shapes– so many young minds today and I feel like it’s the driving force really of pop culture in general and I believe it’s the least understood genre. A lot of preconceived notions, a lot of insinuations are promptly made about it. I feel like it gets misused a lot, so I created this workshop and it varies with the age groups and time lengths and intensive study levels. I basically created it so I could work on a personal basis with different kids in the community to help them figure out future goals for themselves. We try to use Hip Hop to educate them just about life in general, teach them life skills, and really give them that guidance, and I use hip-hop to do it.

TBS: How long have you been conducting these workshops?

RD: This is my second year physically conducting them and so it’s been going pretty well. It’s been a long time coming, but since Newark Mayor Ras Baraka got involved, he’s been really helpful with helping me procure the funds to execute them and now we’re expanding. We’re expanding to cities outside of Newark and we’re expanding from workshops to actual schools. 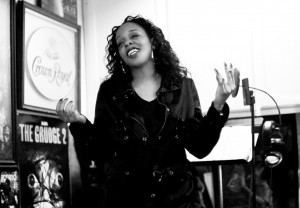 TBS: This is an exciting year because you will be expanding into an actual school, is that right?

RD: Yes. Just recently IArts Media Institute, it’s a newly formed school—it’s actually forming as we speak. I believe the start date is going to be sometime in the summer, but it’s a collective of workshops similar to mine and the media blitz will start on it in a minute, but there’s all sorts of behind the scenes build up for various artists that are going to be conducting workshops of their specialty like Clue, I think, is doing a workshop, you’ve got Chuck from All Hip Hop; I believe he’s doing like a social media workshop just to give a couple of examples. But this is actually a vocational school that is launching in the city of Newark, so that’s something that I’m a part of in conjunction to conducting my own personal workshops that I do throughout the city of Newark as well as other cities. My most recent endeavor is I will be teaching at the Bergen PAC (Performing Arts Center) and that’s based out in Englewood, New Jersey, so it’s spreading to the burbs! [Laughs] It started in the hood and now it’s spreading to the burbs and pretty soon we’ll have private workshops as well where students will eventually pay tuition. I mean, it’s really a steadfast, growing thing so I’m just keeping that up and trying to make ends meet and trying to get to the studio at the same time – so it’s rough. [Laughs]

TBS: That’s amazing though. So what will you be teaching?

RD: I’ll be teaching Hip Hop History. I’m taking kids from the beginning to the present and throughout the decades. I take them on different field trips that correspond with the lesson, like for instance, say this week we’re discussing — I’ll say radio play, things of that nature — then I might take them on a trip to Sirius XM that week so they can see how things are going behind the scenes. Somebody might feel like their area of expertise should be broadcasting. Somebody might feel like they’ll be a great talk show host. Somebody might just want to work the boards. Somebody, hopefully, somebody has a demo ready to go, like what?! So, at any point you can play your position you just got to know what it is you’re coming for and playing it, so I connect the dots. I provide that platform for them to go after what it is they’re seeking.

TBS: How long are the workshops?

RD: A general workshop runs about six weeks. I try to take no less than 12 students, no more than 15. I do have a curriculum that extends out to eight weeks. As far as I see when it becomes a school curriculum just for red tape purposes and things like that it has to be a certain amount of hours, so sometimes they have to stretch it to eight weeks or even 12 weeks, but for the most part a standard workshop is six weeks and it’s pretty good. I like it like that because it gets straight to the point. Week 1, we’re with dealing with the 70s to the 80s. Week 2, we’re dealing with the 80s to the 90s. Week 3, 90s to the 2000s, I like to take them decade by decade each week and then I can really get into it. I show them things, say for instance, I’m giving them a lesson in DJing or something or I’m explaining the origins of DJing and I’ll show them clips of DMC Championships, so they can really see like how it started and the whole, you know the class of scratching on vinyl.

TBS: That’s awesome. So how do you recruit students right now for your workshops?

RD: Well, most of my students come from the city of Newark because I am working it through the city. I get a lot of my students through the youth employment center. So, a lot of those kids are looking for jobs and that’s the great thing about work, too. A lot of these kids, depending on how the situation is set up, will get paid to come to the workshop. For some of them it’s an actual summer job or like a trade, depending on what outlet they’re coming from to the workshop. Originally, we were out there really like trying to lure those kids off the street with these incentives, but since the word has spread that this is a real thing that’s happening you’ve got kids that are graduating with honors from the performing arts high school like, “Hey, we want in.” You know? This shouldn’t be just an alternative kid thing, like let the kids that really want this get a shot at it. So, it’s pretty much open to everybody now.

TBS: What do the kids in the program get out of it? Have there been connections/internships gained?

RD: The ones that pay to sign up they may get blessed with an internship or you know anyone is liable to get an internship. It’s really just a matter of how hard they go for it. If I get you through the door, you work your magic and it’s up to you to take it from there.

TBS: Where do the workshops take place now?

RD: Right now, within the city they were taking place at 550 Broad Street, the youth center offices, but when the IArts Media Institute launches that will be taking place 205 Spruce Street in Newark. That hasn’t physically launched yet. There’s not like one set place where people come to the workshop. I pretty much team up with various organizations and I will come and conduct the workshop at whatever space they provide for me, but home base for me is Newark.

TBS: And the new IArts Media Institute that’s starting in the summer is going to be a specific school that’s being built right now?

RD: That’s it. That’s an actual vocational school. It’s already good; it’s already got its funding from the state. Now we’re just pretty much seeking kids. This particular school, like a lot of these programs originally, were only open to students in Newark, but the IArts Media Institute is actually going to be open state-wide, so any child in New Jersey is welcome to attend from ages 16 to 24, who are a high school graduate or have a GED.

TBS: What inspired you to give back to the community in this way?

RD: Well, because Hip Hop is a culture that’s very important to me. It raised me and I want to preserve its legacy to the best of my ability. I just don’t want the story being retold by someone else. I want future generations to hear it from people that lived it and created it. There’s nothing wrong with being a student of the culture, but the teacher has to be the person that actually lived it and created it.

TBS: Definitely. What else are you working on right now, musically?

RD: Well, musically I have so many different projects that I’ve like started and stopped and started and stopped over the years. I don’t know how soon I will drop an actual full-length album, but I do have several EPs that I’ve just been sitting on. I’m just going to start cranking them out. I know I’ve been kind of in the wind for the past couple of months, but I’m crawling from under my rock now. I was hibernating for a while, but it’s getting warm outside. It’s time to get back to work.