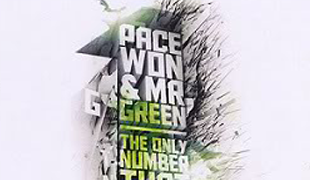 Pacewon & Mr. Green – The Only Number That Matters Is Won (Album Review)

Pacewon and Mr. Green’s follow up to the 2008 album, The Only Color That Matters Is Green, finally dropped and is similarly titled The Only Number That Matters Is Won, continuing where the previous effort left off. Dropping on the heels of Mr. Green’s project with Pacewon’s fellow Outsidaz crew member Young Zee (One Crazy Weekend), Green and Pacewon help pad their boom bap resume with more throwback samples, scratched hooks, and crunchy drums with the new album.

The album is filled with Pacewon’s energetic, humorous mix of tough talk, storytelling, partying, and golden era reminiscing. Mr. Green brings his simple, yet effective formula of hypnotic samples and chopped, classic breakbeats that pay homage to the early 90s of hip hop music. Stand out tracks like “Big Screen”, “Something To Say” featuring Masta Ace, and “Be Mine” with Lee Scratch Perry and Elephant Pelican help show a more diverse sound, collaborative nature, and peer recognition for the new album, even listing a Snoop Dogg feature for the album ending “Lock Me Up”.

Overall, The Only Number That Matters Is Won shows artistic growth and focus on continuing the tradition of music that many hip hop heads feel is lacking in the modern rap industry. Though you may not hear these tracks on the radio, the co-sign by Snoop and Masta Ace and features by Rival, Lawrence Arnell, and BURNTmd should help make more noise for this duo and direct traffic to the talented and rugged vibes that Pacewon and Mr. Green are creating with their modern boom bap music.