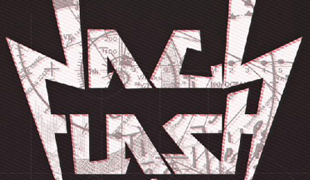 Review by Danielle of The Hip Hop Treasury

The Progression LP by emcee Jack Flash and producer Wizard is most definitely a fresh new hip hop album from the UK. As a die hard hip hop fan and music lover, I wasn’t familiar with these two artists before hearing this album, but I’m glad I am now. The intro immediately grabbed my attention. “Got your attention huh?”… Yes, you most certainly do. Lyrically the album is massive and kept my attention through it’s entirety. Jack Flash and the guest emcees are consistently dope with delivery, flow, and on-point wordplay. Backed by solid production from Wizard, I’m very impressed with this album. “Steamrolling” is one of my favorite tracks. With a pleasantly surprising intro beginning with guitar riffs, the beat immediately drops with a dope vocal sample and Wizard’s hard-hitting signature drums. I was hooked on the opening quote “Playing it safe is dangerous, brother take a risk, be yourself…”. “Four Letter F Word” is a clever concept with wordplay that will throw the listener a curve ball. “Met You Before” displays great storytelling ability, and paints a vivid picture in my head. “Call It” might just be my favorite beat on the album, but it’s tough to choose just one. Some of the hooks seemed to transition from their own sound to what the emcees thought the masses wanted to hear. Personally, I would have preferred more straight spittin’. There were a few beats that reminded me of something I’ve heard before, but the standout tracks were ridiculously fresh and new. Overall this is a stellar album. The beats and rhymes work well together, and you can tell that both Jack Flash and Wizard put 100% effort into this project. I will purchase this album and recommend it to everyone that loves fresh new sounds. From a one hip hop head to the rest of you, go cop Jack Flash and Wizard’s Progression LP.